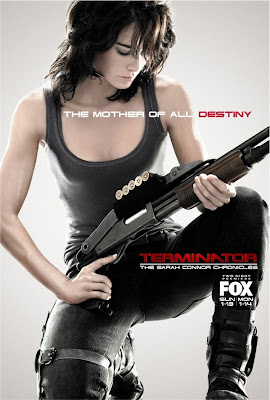 I did enjoy Terminator 3 as an above-average sci-fi action flick, but I can't deny it still felt watered down, like, you know, Terminator for kids. Not only was it PG-fied, they also made Arnold do a "talk to the hand" joke. Past Terminators had jokes, but they're often cool ones (e.g. "He'll live."), not silly shits like this. But what could be worse than a Terminator Part 3 is not Terminator Part 4 (which they're actually making right now, with Christian Bale as great military leader John Connor), but an even more watered down television series.

But reactions have apparently been positive for Terminator: The Sarah Connor Chronicles. There are still criticisms about the show's disregard for certain Terminator lores established in the movies, while completely ignoring everything that happened in Terminator 3 (e.g. Sarah Connor is still very much alive). No idea whether anything from the show would eventually tie up with the upcoming movie sequel (this is not a Terminator fansite... Google up one, you lazy bum). I'm not really hot about the series' re-use of the femme bot, which has a boring design compared to the classic 800 Series Model 101's endoskeleton, ass-kicking skills aside. But then again, one of the few things I'm a big sucker for are action chicks (e.g. Resident Evil, Underworld, Alien, Aliens, etc.), which is why Underworld 1 and 2 will never get Sucks from the BMF. Ahem. The series' poster (see above) looks enticing enough... I'm game to find out how much asskickery they managed to sneak into the PG world of mainstream TV.
Stars Lena Headey (the Spartan queen from 300) as Sarah, Summer Glau (River from Firefly/Serenity) as the femme bot, the dude from Judging Amy, some One Tree Hill-typish kid (sigh) and a couple of beefy men.
Posted by THE BIG MOVIE FREAK at 3:14 PM

Email ThisBlogThis!Share to TwitterShare to FacebookShare to Pinterest
Labels: terminator

she can terminate me anytime...

Err, she's Sarah Connor, so she isn't really the one doing the terminating... :D

if she looks like that, does it matter wat she does to me? anything oso can lah... even if she pull my arm-pit hair out one-by-one!