This week's highlight: The Sparrow!

Was so busy packing up and moving into a new job that I left the site and the blog in neglect for more than a week. You probably should have seen The Incredible Hulk by now. I think it's about as good as Iron Man, and a good sign of things to come from Marvel. If I wasn't so busy, I would have indicated Get Smart as the movie of last week. But this week, we've got the double whammy of Wanted and Johnnie To's The Sparrow! Wanted looks good, but I'd be real crazy to recommend that over a Johnnie To movie!

Posted by THE BIG MOVIE FREAK at 12:57 AM No comments:

This week's highlight: The Incredible Hulk!

What, you mean the Ang Lee version wasn't bad enough already? But from what I've heard, this version of Hulk is a "return-to-form" with more similarities to the comic book; and based on the denim-wearing Bruce Banner in hitchhiker mode in the poster on the left, maybe even a bit of the popular '70s TV series. Early reviews were pretty good, putting its quality on par with Iron Man. Perhaps Marvel's decision to fully control the movie production of its franchises resulted in more stringent quality controls, preventing further lapses of Ghost Rider proportions. This is probably because their survival highly depends on the long-term viability (and respectability) of their licenses, as opposed to studio execs who're just in the current comic book craze for a quick buck.
Posted by THE BIG MOVIE FREAK at 12:27 AM No comments:

Oh Vader, where art thou?

Sex or Panda? Never saw the TV series... Panda it is. Doesn't seem as exciting as the stuff Pixar churns out, and looks a lot like another white man's condescending movie about Chinese martial arts. But Jack Black in character as the titular dà xióng mao was funny in the trailers and PSAs. The reviews sounded good, but then again, so did Crystal Skull's. Grr...
Posted by THE BIG MOVIE FREAK at 11:32 PM No comments:

Funny toon! (Not by me) - Another Indy 4-related posting! 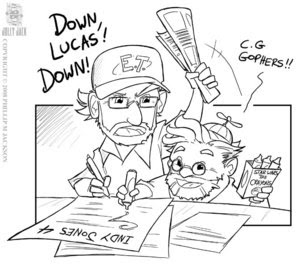 Awesome toon poking fun of the latest Indiana Jones installment by "*jollyjack". See the bigger toon by clicking on the picture. It'll take you to his page on deviantART.com.
Posted by THE BIG MOVIE FREAK at 11:54 PM No comments:

Mythbusters take on Indiana Jones and the Temple of Doom!

Wow, even I thought the raft scene was totally ludicrous, but the Mythbusters really proven it could have worked. Now, if only they could bust the "nuke the fridge" one next...
Posted by THE BIG MOVIE FREAK at 1:07 AM No comments:

Record-setting US$100 mil weekend opening... sigh. If you haven't seen Indiana Jones and the Kingdom of the Crystal Skull, or if you did and actually loved it, then you won't get what this is all about. Hey, we don't enjoy expressing hate, but angry fanboys are what you get when filmmakers not only jumped the shark, but nuked the friggin' fridge!
For the hardcore, you might want to check out the humongous fan rants (from both sides of the fence) from Aintitcool.com here. There are some good arguments there (mostly against) among the vile words of exchange and grammatical trainwrecks.
Posted by THE BIG MOVIE FREAK at 1:09 AM No comments: