For those who are born after 1990, you may not be familiar with Sylvester Stallone, who was one of the action movie kings of the Eighties, along with Arnold Schwarzenegger, Bruce Willis, Van Damme, etc. Stallone was most famous for playing slow-witted pugilist Rocky Balboa in the Oscar-winning movie, Rocky, and its five sequels. His other famous role is John Rambo, whose name is now synonymous with reckless, gung-ho behaviours. You've probably seen this image somewhere before: 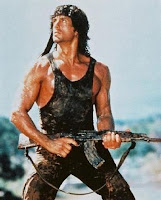 Quite a sight, huh? Believe it or not, at 64 years of age, he's actually BIGGER now. Anyway, one day he decides to make a movie called The Expendables, about the titular team of mercenaries who gets personal dealing with a South American dictator-cum-drug lord. This would be the one that would bring all his former competitors together in the same film, and lets them kick ass like they used to twenty years ago.
Think of it like the Justice League or the Ocean's Eleven of Pixar's Up. But it's not really that, because most of the big stars only guest appears, while the team of Expendables only consist of a balanced mix of old and young stars. Well, if you consider Jason Statham, Jet Li, "Stone Cold" Steve Austin and Randy Couture to be "young". You'd be sorely disappointed if you expected to see the action gods trade one-liners with each other while mowing down hordes of bad guys with submachine guns in unison. The movie is supposed to be a throwback to action movies of the Eighties, but it's not even that either, because of the frequent use of "shaky cam" that is uncharacteristic of those types of movies.

What we ended up having on the big screen is a fairly watchable, entertaining but unexpectedly goofy little movie, with more male-bonding awkwardness than there are badassery. You can find more badass moments in any single Tarantino movie. The movie it most resembles and reminded me of is The A-Team.
You can't blame poor Stallone for not trying. Apparently, making these sort of "ensemble" movies is really, really freakin' hard. Check out the stuff that went on behind the scenes here.
Rating: Average.
Saw it at: Golden Village Jurong Point, regular evening show.
Cost: SGD 10 (weekend rates)
Posted by THE BIG MOVIE FREAK at 11:39 PM