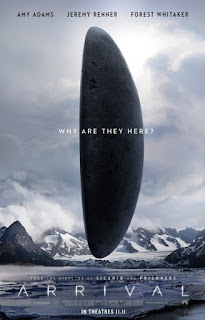 My most anticipated movie of 2016. It's a "pure" science fiction movie like 2001: A Space Odyssey or The Martian where the emphasis is more on the science than fiction. Just like how The Martian made botany cool, Arrival does the same for linguists. The fun thing about the movie is trying to figure out what the aliens want, and to do that you need to figure out how to communicate with them. This movie approaches that process with a high degree of realism, which I've always felt is a lot more interesting than trying to simplify it (e.g. make aliens speak in perfect English using magic tech) because you're afraid the general audiences will not understand or appreciate it. Of course, the movie is not just all about that. There is a mystery behind the aliens' intentions and a lesson to be learned. Overall, this is a thrilling and fascinating movie that makes you think more than the average crowd-pleasing sequels. Very well directed by Denis Villeneuve, who did Sicario previously, and will direct the sequel to Blade Runner next. Because of one minor gripe (see below, but with spoilers), this is a good but not great one for me.

My minor gripe is that its resolution plagiarized the same time paradox idea used in movies like The Terminator and even Interstellar. Different packaging (because of the linguistic angle), but same content nevertheless. People who hasn't seen many sci-fi movies, especially kids will have their minds blown by the ending, but for jaded connoisseurs this felt like an unnecessary retread that came too soon after Interstellar had done the same thing just three years ago.

Proof of Purchase
Posted by THE BIG MOVIE FREAK at 5:35 PM