Review: Transformers - Revenge of the Fallen

Some time has passed since the events of the previous Transformers movie. After the defeat and death of Megatron, "transformers" from every corner of the universe, Autobots and Decepticons alike, started making their way to planet Earth en masse. The humans recruited the Autobots to hunt and destroy the Decepticon nuisance, while trying to keep their existence under wraps from the public. Things start to get more complicated when an ancient Decepticon who calls himself "The Fallen" appears, looking for a Decepticon weaponry long hidden somewhere on Earth that could potentially destroy the world.

Transformers 2, or Transformers: Revenge of the Fallen still possesses all the problems from its predecessor, and worse. The comedy that held up the entertainment factor of the first one has deteriorated in quality in the second. With lesser good laughs, the second movie leans more heavily on the other major aspects - action, acting and story - but there isn't a marked improvement on these either. The action is still a mess, no thanks to the convoluted designs of the robots, where it is still very difficult to make out the head from the feet, especially when the robots are on the move. The camera does not jerk around as much, but it's just a mild compromise. Shia LaBeouf is less goofy and more serious and heroic and dramatic, a development that shortchanges on his character's core appeal. Megan Fox had more to do in the first one despite being objectified as a sexual conquest for the hero. Here, she's just purely an object positioned here for maximum oogling satisfaction. Like Pirates of the Caribbean, Transformers 2 confuses plot convolution with sophistication, making a baffling mess out of what is simply a "Decepticons want to destroy the world" tale. And finally, the robots are still relegated to supporting duties when they're actually the real stars of the show.

But the thing that finally derails the movie are the two blatantly racist depiction of African Americans via two twin robot characters, who sport gold-capped teeth, cuss a lot, and act like sub-intelligent buffoons. There are so many ways to make these characters more endearing and likeable (they're the good guys after all), but the filmmakers just had to make them as obnoxious as possible. However, the real "icing" on this putrid cake is when they introduce fan favourite Transformer, the Devastator, a gargantuan and destructively powerful Decepticon that is actually a formation of several construction vehicle-themed Transformers, only to have his awesomeness crash down several notches by letting the twins almost nearly defeated him. - BMF

Posted by THE BIG MOVIE FREAK at 4:44 PM No comments:

The original face of BigMovieFreak.com... 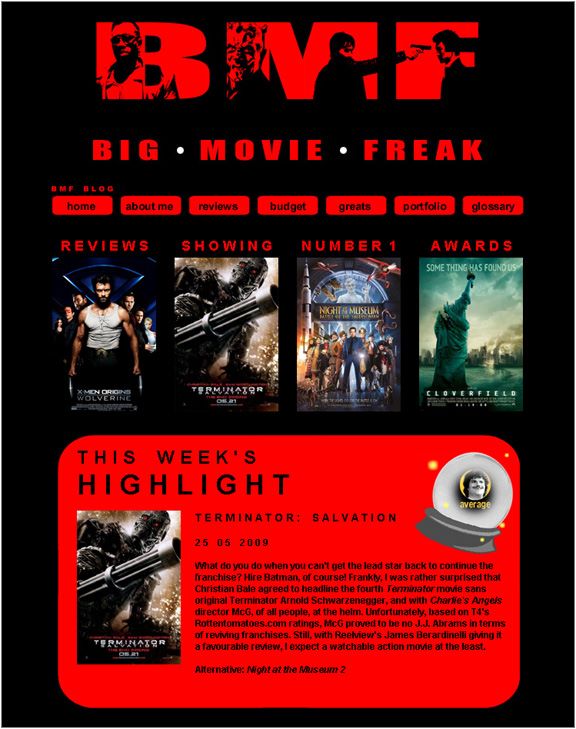 Posted by THE BIG MOVIE FREAK at 12:14 AM No comments:

Sam Raimi, co-creator of the Hercules and Xena TV series, director of the infamous Evil Dead movies and Army of Darkness, will take the reigns on the movie adaptation of massive multiplayer online role playing game (MMORPG) "World of Warcraft", says Harry Knowles of AintItCool.Com. Apparently, the notorious Uwe Boll (Bloodrayne, In the Name of the King) was a front-runner for the director's seat, much to the chagrin of game fans everywhere. Interestingly, Raimi was previously in Peter Jackson's shortlist of potential directors for The Hobbit, another medieval fantasy. Raimi is a far, far more revered director than Boll, and he's definitely a very reassuring choice to guide an adaptation of a genre known for its highly consistent cinematic failings.

Oh, did I forget to mention that he directed some comic book movies about some spidery superhero fella?
Posted by THE BIG MOVIE FREAK at 10:20 PM 1 comment:

My Blog is now my Site

Surprise! Due to the financial crisis, I have decided to cancel my web hosting with Yahoo and make this Blog the official BMF site instead. Ok, honestly it wasn't the financial crisis, just that the hosting's awfully expensive that it's taking up half my annual movie budget, which could have been put to much better use. Also, beautiful though the old site may look, creating a new page is awfully time consuming, even with a ready template. Too many variables to customise. I could spend an entire night just to put up a new review. Blogger is a little aesthetically-challenged, but postings are relatively fuss-free and archive themselves automatically. A lot of other sites are also using this type of neater and simpler blog-posting format.

There'll be a lot of "transfer" work in the next few months. I will definitely bring over all my reviews and other stuff. Expect some funkiness on the blog too, with pictures missing from certain posts. I shouldn't have "borrowed" the pictures from my Yahoo-hosted site. (sigh)

I do feel a little sad because I really loved the old site's design. I have it backed up already, so I could still maybe one day restart another hosting again. We shall see.
Posted by THE BIG MOVIE FREAK at 8:26 AM No comments:

If you're the kind who can't tell the difference between Star Wars and Star Trek, you'd likely not watch the latest "reboot" of the series, restarting the franchise with new actors reliving the adventures of familiar characters, albeit updated to current sensibilities. Similar treatments had been done and done successfully to the Batman and James Bond series. But based on what I've heard, this may finally be a rendition of the rather cult-ish sci-fi series that is meant for mainstream audiences, a.k.a. your "kind". The new Star Trek has the sexiest and youngest cast, as far as I know, and seems more action packed than the other Trek films combined. Friday U.S. box office receipts indicate a huge weekend opening take, while most critics reacted positively. Might be worth a watch.
Posted by THE BIG MOVIE FREAK at 12:13 AM No comments: