Dai-nipponjin! (no relations to the Tech Freak) 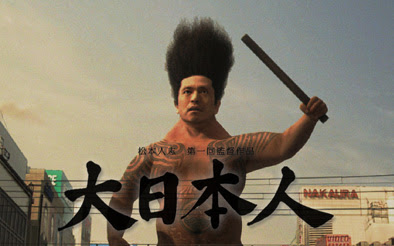 Wanted to share this news from Aintitcool.com about a crazy Ultraman-type Japanese movie showing at the Toronto International Film Festival (TIFF) right now. It's called Dai-nipponjin, and it's about a loser guy who turns into a 50-foot giant who looks like a cross between The Rock and Sun Goku (see pic above). When he's a regular sized guy, he actually carries his giant spandex underwear around on his back (see below). He protects Japan by fighting other giant creatures: one resembles an old guy with a comb-over and giant rubberbands as arms. Yes, it's supposed to be funny. Read more about it here, or go to the Jap site by clicking here or the above pic. 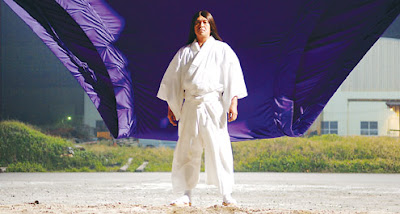 Posted by THE BIG MOVIE FREAK at 8:46 AM