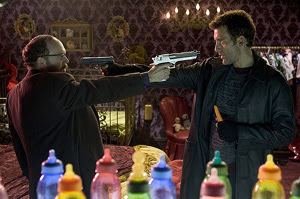 If you read Roger Ebert's review on the upcoming action flick Shoot 'Em Up, then it must have spoiled the movie for you like it did for me, revealing what a crazy f***ed-up movie this is (but in a good way). In tandem with the upcoming release of this American homage to John Woo's mother-of-all-action-movies Hard Boiled, FHM has compiled a list of the top ten best shootouts in movie history. But it's a real travesty that they didn't include a single shootout sequence from Hard Boiled in their top ten.
Elsewhere, Will2k listed the top five best death by gunshot scenes at the bottom of his L.A. Confidential review last year, republished again here for your enjoyment:
Will2k's top 5 best deaths by gunshot (in his own words)
Posted by THE BIG MOVIE FREAK at 2:42 PM

Email ThisBlogThis!Share to TwitterShare to FacebookShare to Pinterest
Labels: shoot 'em up